Florida Man Gets His Second DUI: Time To Cry? 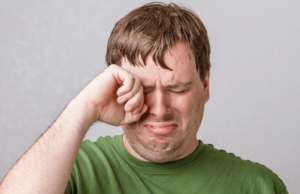 Out of all the things you would possibly think to say or do when a police officer is about to arrest you for your second DUI (driving under the influence) charge, uttering the words “it’s my day to relax” and bursting into tears probably isn’t one of them. But that’s exactly what one man decided to do when he was arrested again for DUI in Florida.

The 32-year-old man was trying to buy alcohol at a local liquor store when the employees stopped him. Apparently he had been in 30 minutes prior to buy a pint of Sailor Jerry Rum, and when he returned to buy a pint of Captain Morgan, the employees refused him service. He even tried to send in a friend to buy the alcohol, but she was refused too.

Shortly after, an officer decided to stop him and discovered the drunk man with a female passenger and small child in a car seat in the back seat of the car. He failed his field sobriety test, refused to submit to the breathalyzer, and when the officer told him he was going to be arrested for DUI, he turned on the waterworks.

While crying the drunk driver explained that it was his second DUI charge and that he ruined his life. He might be telling the truth. A second DUI in Florida will net the man anywhere from nine months to one year in jail, he could pay up to $4,000 in fines, and he could lose his driver’s license for up to five years. His suspension could be reduced to one year, but he’ll have to drive with an ignition interlock device. He could also receive penalties for refusing the breathalyzer and possible penalties for child neglect.

Just a heads up to anyone drinking and driving in Florida: tears don’t work when you’re arrested for your second DUI. The Florida police have seen it all, and if you’d like to avoid a situation like this one, make the right choice and say no to drinking and driving.

The States To Watch For Teen Alcohol-Related Crashes
Next Post: Ignition Interlock Bill Alive And Well In Massachusetts