Drunk Driver Has An Ill-Timed Craving For Frozen Yogurt

You are here: Home / Offbeat / Drunk Driver Has An Ill-Timed Craving For Frozen Yogurt
April 12, 2016 by Matt Talley 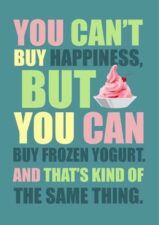 The United States is full of fro-yo enthusiasts, and although there aren’t that many things that should stand between someone and their frozen yogurt craving, a police officer is definitely be one of them.

For one drunk driver, the craving for frozem yogurt meant she left her common sense at home when she decided to make a run to her local coffee shop in Great Falls, Montana. Unfortunately for her, to get her favorite frozen treat, Charlene Kranitz had to walk right into a ‘Coffee with a Cop’ community event. Held at Schulte’s Coffeehouse, there were 15 police officers inside the shop at that moment, and they even had a squad car sitting out front with its lights flashing.

One of the police officers noticed that Kranitz was stumbling slightly, and when she walked by him he detected the odor of alcohol trailing behind her. When he followed her out to the parking lot he discovered she had driven to the coffee shop in that condition, and what’s worse, her car was parked up against a light pole. After making the judgement call that Kranitz was over the legal limit, the police officer arrested her.

That arrest may curtail any cravings for fro-yo in her immediate future. In Montana, a drunk driver receives a misdemeanor for driving under the influence (DUI). That charge results in a driver’s license suspension of up to 6 months, 2 days to 6 months in jail, up to $1,000 in fines, and the possibility of an ignition interlock for a period of time.

There was no mention in the original article whether or not this drunk driver managed to get her fro-yo before she was arrested, but for now she’ll either be in jail or she’ll have to rely on the courtesy of friends to get her to the coffee shop for her next dessert craving. Thanks to her drunk driving charge, she definitely won’t be driving.