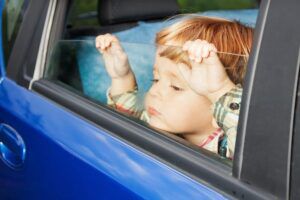 Every impaired driving crash is tragic, but crashes that involve children are even more so. Children have no understanding that a car can turn into a deadly weapon when put in the hands of a drunk driver, and all too often when a parent makes the choice to drink and drive their children end up paying the price.

That’s the horrible lesson an Omaha family must now pay after a father drove drunk with his kids in the car. He crashed with his three daughters in the back of the vehicle, but he didn’t stop to find out if they were OK. Instead, he kept on driving while dumping alcohol containers out of the car.

His three children were seriously injured, but he didn’t stop to get them help. Aged eight, six, and one, they would have had no idea what hit them. When he was finally pulled over by police a short time later they discovered that he had injured passengers on board, and they also discovered he had four previous DUI convictions on his record.

He was charged with drunk driving, three counts of child abuse, and one count of failing to render aid. For his impaired driving crash he was sentenced to 22 to 25 years in prison, but he’s lost a lot more than just the time he’ll spend in jail.

Thanks to the crash, his eight-year-old daughter is in a persistent vegetative state and doctors believe she’ll never recover. That’s not something any amount of time in jail or any type of Nebraska drunk driving penalty can fix.

Because her father drove drunk, a child’s life is essentially over. It happens all too often when people make the choice to have a few drinks and put the keys in the ignition, and no one wants to be the parent responsible for a situation like this.

If you want to protect your children, the best thing any parent can do is to pledge to always drive sober.

Happy Labor Day From Guardian Interlock
Next Post: You Can Do A Lot Of Damage Before Your Florida DUI Arrest