Just Say No To The DUI Selfie 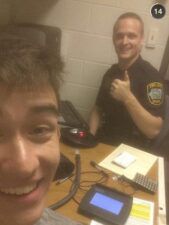 Unless you’ve been living off the grid somewhere, you’ve probably heard of or have taken your own selfie. These individual snap shots have become such a big thing the word has its own entry in the dictionary, but it might be awhile before they have an addition for the ‘DUI Selfie’.

The driving under the influence (DUI) selfie came to be after a young man in Iowa City was arrested after being pulled over for speeding. The arresting officer noticed he had the odor of alcohol inside the vehicle and when asked, the driver admitted to smoking marijuana before he got behind the wheel of his car.

After a few field sobriety tests, the driver displayed what the officer called a ‘measurable impairment’ and he was then asked to submit to a breathalyzer test. That breathalyzer resulted in a .0 reading, and at that point a Drug Recognition Expert made an assessment. He determined that the driver was under the influence of cannabis and he was deemed unsafe to operate a vehicle.

Where did the selfie come in? When he was brought in to the police station, the driver asked the officer if he would pose for a Snapchat selfie with him. The officer obliged, and even gave the thumbs up.

It might be pretty funny when you see someone snapping a selfie in a situation like this, but not every DUI case ends on such a lighthearted note. Driving under the influence of drugs or alcohol is extremely dangerous, and this driver might not be smiling when he receives up to $1,200 in fines and a 180-day drivers license suspension. If it was his second offense, he will also have to install an ignition interlock device in any vehicle he drives.

Let’s hope this is the last we’ll see of the DUI selfie.

Drinking Mom Gets 4-Year-Old To Blow Into Her Ignition Interlock
Next Post: It’s All Fun And Games Until Your Child Has To Drive You Home