You are here: Home / News / Drinking Mom Gets 4-Year-Old To Blow Into Her Ignition Interlock
September 3, 2015 by Matt Talley 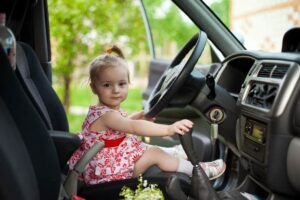 When someone drinks and drives and they are by themselves in the vehicle, the risk isn’t just to them alone. A vehicle with a drunk driver behind the wheel has the potential to injure or kill anyone he or she comes into contact with, and if they do have someone in their car, the people they have along for the ride can be injured or killed too. Unfortunately that happens all the time with children, and one Florida mom is a perfect example of that.

Florida police released a video of a four-year-old child blowing into an ignition interlock device as his mother looked on. The mom in question had left her two small children in the vehicle while she went into a local bar, and when she came out her child blew into the device to start her vehicle.

Once the vehicle was started, she got behind the wheel and drove through the parking lot before being stopped by the police. She was slurring her speech and unsteady on her feet, and when she turned her vehicle off, police taped her child confidently blowing into her ignition interlock device to get it started again.

This wasn’t the mom’s first driving under the influence (DUI) charge, and her husband said that although she had been to rehab, she should spend time in jail because rehab didn’t work. That may happen, because in Florida having children in the car while drunk is considered to be an Aggravated DUI. A first time DUI in Florida will net an offender a maximum of six months in jail, and it could be 9 months for an aggravated DUI.

Drinking and driving is dangerous enough on your own, but taking along a child and having them blow into your ignition interlock device so you can drive while drunk is criminal. Let’s hope the mom in this case serves as an example to other parents who are tempted to drink and drive.