ATVs Are Really Dangerous If You Drink And Drive

You are here: Home / General Information / ATVs Are Really Dangerous If You Drink And Drive
September 9, 2015 by Matt Talley 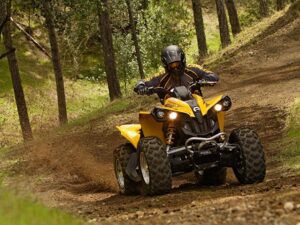 ATVs are fun, right? They’re a great way to get outside and enjoy the outdoors in the summer, and people take them along with them camping or just to spend a few hours in the wilderness. Unfortunately, ATVs are also dangerous, and they are never more so than when someone gets in the drivers seat of one and decides to drink and drive.

Drinking and driving on an ATV is pretty common place, and that’s surprising considering you can be charged for driving while intoxicated (DWI) if you’re stopped by police and found to be drunk while on one. You can also be severely injured or killed, and that’s what one Minnesota man found out recently. He suffered a head injury after being ejected from his ATV when another ATV hit him.

Although his condition is not currently known, he was charged with second-degree driving while intoxicated (DWI) and second-degree refusal to test. Criminal penalties for DWI in Minnesota are based on the number of aggravating factors, and that’s why the man was charged with second degree DWI. That charge is a gross misdemeanor, and he could see a $3,000 fine and/or one year in jail.

Maybe the driver of the ATV didn’t realize that you can be charged for DWI on any type of motor vehicle in Minnesota, or that refusing a breath test in most states means an automatic drivers license suspension and penalties that are similar to what you’d receive for your DWI conviction.

Yes, ATVs are considered a fun vehicle to drive, and it’s unfortunate that someone had to get hurt to highlight just how dangerous these vehicles can be when you’re drunk and driving one. No matter where you live in the United States, this is good lesson for everyone to learn: from tractors to lawn mowers and everything in between, drinking and driving on any type of motor vehicle can net you big trouble.