What Can Happen When You Drink And Drive? More Than You Can Imagine

You are here: Home / Offbeat / What Can Happen When You Drink And Drive? More Than You Can Imagine
December 13, 2016 by Matt Talley 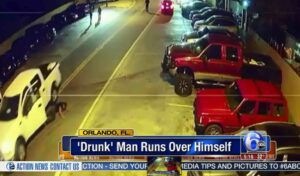 What’s the worst that could happen when you drink and drive? It’s true that different situations can happen to different people and there’s no one-crash-fits-all scenario,  but the one thing you can count on when you’re drinking and driving is that anything can happen.

Thanks to the power of alcohol affecting your coordination, vision, and senses, it’s all too easy to get into a drinking and driving crash where you drive into a power pole, off a road into a ditch, or straight into an oncoming car.

There’s also the strong possibility you’ll end up in legal trouble. Even if you’ve never received so much as a traffic ticket and you have a sparkling clean criminal record, drinking and driving can mean you end up arrested and anywhere from a few hours to a few years in jail.

Drinking and driving could also get you into some really strange situations; situations that would be hard to explain to friends and family when you’re sober. At least that’s what one Florida man found out recently when he found himself in a situation where he found out it’s possible to run yourself over.

How can someone run themselves over in their own vehicle?  It started with a night out in a strip club, and when the man decided he was driving himself home despite the fact that he was drunk, he ran himself over. You can see exactly how it happened in the video below.

Once the truck ran him over it kept going, and unfortunately it crashed into a house and hurt a woman inside. Although the man must also have been injured from getting run over, he ran away from the scene and was only arrested once the police tracked him down. Now he’s facing drunk driving charges, and in Florida that means driver’s license suspension, fines, and the possibility of an ignition interlock. With an ignition interlock installed, he won’t have to worry about being so drunk that he drives over himself again.

So if you’re ever holding the keys in your hand and you ask yourself, “What’s the worst that can happen if I  drink and drive?” just remember this man and you’ll realize that anything goes when you mix alcohol and your vehicle.

Virtual Reality Lets You Experience A Drunk Driving Crash
Next Post: Are Ignition Interlocks Finally Going To Happen In Ohio?