Your Seasonal Reminder About Boating Under The Influence

You are here: Home / General Information / Your Seasonal Reminder About Boating Under The Influence
April 29, 2016 by Matt Talley 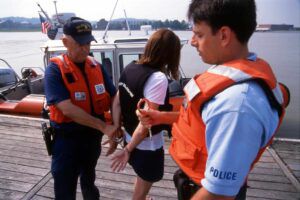 The sun might always be shining in Florida, but just like in every other state, summer is when people in Florida really get out and hit the water. Summer is also when people tend to be arrested for boating under the influence (BUI), and in Florida, a state with over 870,000 registered vessels on the water, it’s a huge problem.

Most people know that drunk driving is illegal, but they wouldn’t think twice about having a few drinks out on a boat then getting behind the wheel. After all, there are no roads, no traffic lights, and no police out on the open water, right?

It’s true, there’s no set path to stick to when you’re boating, but there are police that patrol the waters in Florida, and they’re looking for anyone who’s boating under the influence. It’s illegal in Florida to operate a vessel or even operate water skis, sailboards, or other flotation devices on the water while under the influence.

When police pull over a boat on suspicion of BUI, they’ll be looking for open containers of alcohol and whether the person in control of the boat seems impaired. Police may ask the driver to do a sobriety test, and if they have reasonable suspicion that the driver is impaired, they’ll ask him or her to provide a breath sample.

If you’re arrested on suspicion of boating under the influence, Florida law requires you to pay up to $1,000 in fines, you may go to jail for up to six months, receive 50 hours of community service, and you may have your vessel seized.

Those penalties are a high price to pay for a few drinks out on the open water, and there’s also the risk of death or the death of someone else if you crash your boat while drunk. If you’re in Florida and you’re getting your boat ready for another season, make sure you leave the alcohol at home or appoint a designated driver while on the water.

David Cassidy’s Drunk Driving Has Cost Him His License
Next Post: Here’s Why Some People Don’t Plead Guilty To DUI